The Greatest Golfer, a Youngstown-based amateur tournament series, has joined Northern Ohio Golf as an Association Member for the 2021 golf season. 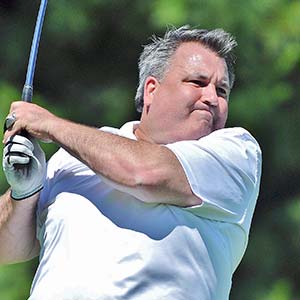 The Greatest Golfer was originally created in 2010 by Todd Franko (r), then editor of Youngstown’s regional newspaper The Vindicator, and his co-worker Ted Suffolk. They joined with some key golf courses (Mill Creek Metroparks Golf Courses in Boardman, The Lake Club in Poland) and local business partners (Farmers National Bank, The Muransky Companies) to focus on promoting golf in the Mahoning Valley.

The concept began as an ’18 best local golf holes’ weekly feature that was to run in the Vindicator during the summer months in 2010. But from there, it morphed into a 54-hole amateur tournament played at summer’s end to determine the “Greatest Golfer of the Valley”.

That decision and those first 97 golfers seeded what GG has become today: a 20-event, 12-course summer-long golf event series for players ages 12-80, with more than $10,000 in prizes fueled by great corporate partnerships. The annual 54-hole championship event is now contested in multiple flights and draws 300+ players every August.

In 2011, GG added a juniors championship played in June and July, with six qualifying tournaments each drawing 70+ players ages 12-18. The top 48 junior players compete at Avalon Golf and Country Club for the finale.

In 2012, the Coors Light Scramble Championship launched, hosted by Superior Beverage. The event assembles the winners of 24 local charity scrambles to compete to be the Greatest Scramble Team in the Valley.

In 2014, the Greatest Long Drive Championship was created at Tippecanoe Country Club, now crowning the longest hitters in Men, Women and Senior divisions. In 2019, The HBK Par-3 Shootout Under the Lights was added to the Long Drive contest at Tippy, and it was an immediate crowd-pleaser.

Since the closure of The Vindicator in 2019, The Greatest Golfer now operates as an independent golf content and competition business, still run and supported by many of the same original founders. The series is expanding to other cities nationally.

For 2021, The Greatest Golfer joins Northern Ohio Golf to promote its tournaments to players outside of Mahoning Valley, to further expand its reach and grow its events for both amateurs and junior players.

Watch for an announcement in the weeks ahead as GG finalizes its 2021 tournament schedule and unveils the full details of those events on this website. Northern Ohio Golf looks forward to working with The Greatest Golfer!