Continuing our Golf Life NEOH series, with a focus in 2020 on the many great golf courses in the region. But sorry, no “course review” stories here. Instead, we’ll bring you writing and video features with truly unique takes in the months ahead. We start with a cool story by Ryan Book about a forgotten land feature at Sleepy Hollow Golf Course in Brecksville, one that brought visual terror to golfers while earning the focus of many sportswriters back in the day…

The Cuyahoga River Valley, like almost every other basin in Ohio, was forged by glaciers. That ice did not move in the most streamlined of manners, resulting in the varicose veins you see on most watershed maps. The result at Cuyahoga Valley National Park is a range of creeks and waterfalls such as Brandywine, the tallest in the state and—a few miles away on the other side of the river—Blue Hen and Buttermilk.

At Sleepy Hollow Golf Course in Brecksville, the evidence remains in a series of ravines that designer Stanley Thompson placed par-3 greens along (the Canadian icon was noted for choosing the sites for his short greens first, to best take advantage of the property’s natural features).

One lesser-known piece of glacier memorabilia: The Canyon.

Even among the numerous ravines at Sleepy Hollow, the drop-off along the right side of the No. 14 fairway is severe and — unlike the present day — totally visible when the club opened during 1921. Players of that era would have driven to the crest of the hill and seen a majestic view totally unlike today’s second shot.

The canyon ran along the final 150 yards toward the green, daring players to bite off as much as they could chew — not unlike the second tee shot at The Pete Dye Club in West Virginia. For as intimidating as Dye’s many Cape-style tee shots around water are, a simple “splash” has nothing on watching a doomed ball careen into the depths of a 75-foot deep canyon, trees at the bottom obscuring its final destination.

Ohio is not known for spectacular geography and, accordingly, “The Canyon Hole” became notorious in the region. Writers commended it as one of the most exciting holes in the golf-rich Cleveland area, both for its visual and strategic appeal. Distance itself never made it an issue to get home in two, even for the era’s technology. As The Cleveland Plain Dealer noted during its preview of the 1938 U.S. Open qualifier, however, the canyon’s presence ate at nerves and quickly exaggerated scoring.

“The most terrifying place on the course is the ‘canyon’ on No. 14, a Par 5 hole that will be about 500 yards or so for the Open qualifier. The canyon or gorge is some 75 feet deep and straight down. It lies to the right of the fairway and can be avoided easily by a player only interested in his par 5. The trick is to loft a second shot over the canyon and reach the green in two blows for a birdie. Most of the pros can get home with a drive and a spoon, or perhaps with a two or a 3 iron with the second shot, but the penalty for a miss is heavy. A possible birdie 4 can turn into a 7 in a twinkling. A ball dropped into the abyss is there to stay. There is no chance to make a sensational recovery.”

Stanley Thompson’s flair for dramatic holes stands without question, considering the heritage of his course series within Canadian national parks. It’s appropriate coincidence the land Sleepy Hollow sits upon would one day become integrated into an American national park, to showcase yet another prime example of Thompson using gold-feature landforms to create gold-standard golf holes.

That is assuming, of course, that Stanley Thompson designed “The Canyon Hole”… 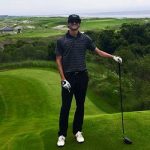 Ryan Book is a freelance golf writer who has been published in The Golfer's Journal, The Fried Egg, Top100GolfCourses.com. He hosts his personal golf architecture blog at BethpageBlackMetal.com.

Next 2020 Stark HOF Induction Ceremony Postponed; County Am Goes On