Two guys who had never played golf together until Saturday at The Quarry tied with two players who have partnered a lot.

Zach Chinn of Columbus and Nathan Jensen of Cloverdale, OR were introduced to each other days ago by tournament regular Josh Prok of Akron, a mutual friend of both players. Their brand-new golfing partnership didn’t get off to the best of starts on Saturday, as they toured their first nine holes at The Quarry (the back nine, as the nines were played in reverse order) at a tepid 2-under par 34.

Figuring they were just out for some fun after their rough start, they hit the halfway house at the turn. What a kick-start! They dunked an eagle at the par-5 first, then proceeded to reel off six birdies in their next eight holes. The pair ran in putts from everywhere on the inward nine to post an eye-popping 28 for a 10-under par total of 62.

But Chin and Jensen were worried about their finish. On the 167-yard par-3 ninth hole, played as the last of the day (and as the JR Bath Hole-in-One Extravaganza hole!), they stuck their tee shot to six feet but missed their final birdie chance of the day.

The entire field knew the score required to win, thanks to the Live Scoring by NOGA system that worked perfectly and was widely praised by all the players. Three teams were able to get to 9-under par and four more reached 8-under, but none could catch the leaders.

Nearing the end of a long day of golf with a giant sold-out 128-player field, the only team left with a chance to reach -10 was Steve Blackburn Jr. and Jimmy Wild. But they would need a — ahem — wild finish. How wild? They were still four shots back with four holes to play.

But like a movie script, they made birdie at the short, downhill par-3 sixth then the reachable par-5 seventh. When they canned their birdie at the tough par-4 eighth hole, leaders Chinn and Jensen — who were watching the Live Scoring by NOGA on their phones right behind the ninth green — again began to lament their earlier miss on the home hole.

With about 20 players spectating, Wild stepped up to the ninth tee and knocked the 167-yard shot to about 16 feet. Then putting first for the team as the sun began to set, Wild smashed the back of the cup with his putt, popping the ball a bit into the air before it settled into the bottom. Blackburn boomed a giant “Yeah!” with his fist-pump as Wild went to pick the tournament-tying putt from the hole. 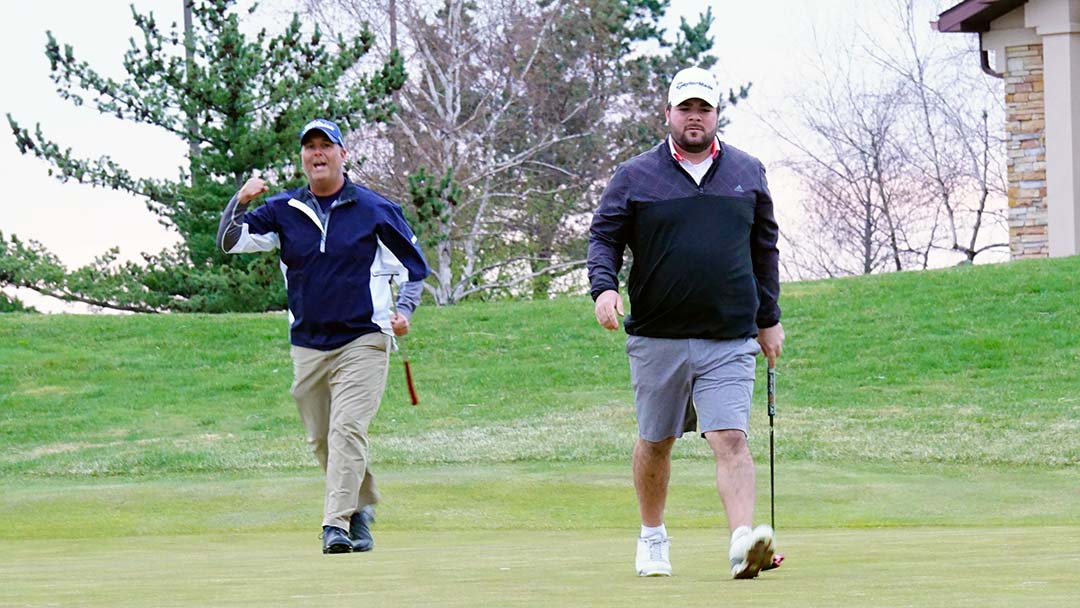 The biggest winners of the day were the team that scraped the entire skins pot — and what a day to do so! Making an eagle-3 on the par-5 11th hole, Jon Clark of Copley and Jay Hollifield from Canton took the whopping $2,560 in its entirety, thanks to some surprisingly tied eagles at both the uphill par-5 first hole and the reachable par-4 fourth (which the skin winners themselves helped to tie).

No one was able to claim the $10,000 JR Bath Hole-in-One Extravaganza prize this time, but the opportunity will be available again in two weeks time.

The next event on the 2021 Series schedule is the NOHIO.GOLF Turkeyfoot Stableford + Skins at Turkeyfoot Lake Golf Links in Akron on Saturday, April 17th. Get your entries in asap before the event sells out yet again…

2022 Tigertown Open: Help Us Make It Even Better!