It was day of smashing debuts in ‘Joe’ Dickey Electric Greatest Golfer Thursday at Salem Hills Golf and Country Club as four players in four divisions played in their first event and earned spots in the July championship.

Caleb Domitrovich shot 78 in a stacked Boys u17 field of 20 that featured several top Valley high schoolers, including previous Greatest qualifier Chaz Ekoniak of Struthers, who lead the field with a 75. Domitrovich of McDonald benefitted from Ekoniak already qualifying.

Finishing just behind in the Joseph Nohra Insurance division were Struthers’ Chance Laczko and Canfield’s Nolan Williard — both with 79s. It was Willard’s best round of the season.

Canfield’s Madison Murphy made her first Greatest appearance of the season and scored 90 to lead the Girls u17 Magnolias on the Green division.

“I had a good stretch of holes, and my putts were dropping,” said Murphy. She said her summer of golf around Ohio has been strong.

On her heels were JFK’s Samantha Calderone, with a 93, and Jocelyn Zhao , with a 95.

In the Boys u14 Kreps Drywall division, Ray McCune of Canfield played his first Greatest event ever, and scored 85 to earn a finals bid.

“Around the greens, I was really good today. From 150 yards in, I was strong,” said McCune. He was also string off the tee box. On No. 1 today, his booming drive landed about 30 yards short of the green.

He was followed by Matthew Morrone of Poland with a 90, and Braeden Sallee of Austintown with a 91.

In Ambrose Family Eye Care Girls u14, Alyssa Zhang of ShadySide shot 91 to finish ahead of Canfield’s Kendall Johnson, who shot 118. 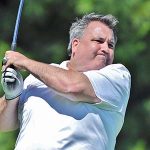 Get the Scoop on College Golf!