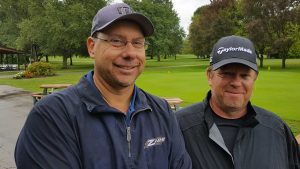 The team of Brian Beebe and Dave Trier finished the round at 8-under par to claim the first place reward.

Jeff Stormer and Ray Berry were next at 66.

The team of Adam Trent and Dean Cutlip tied Tim Hepner and Matt Gasser for third place with a 5 under par. Darren Miller and Jeff Turner had a 69.

17 teams competed in the chilly November weather for the final event of the Yuengling Scramble Series.

Previous Rounds Played in CLE Up Again in September