Just days before the 2019 OHSAA season officially kicks off on August 5th, players from high schools across the state brought their pre-season “A” game to the 18th annual Ohio Girls Golf Foundation Showcase on July 29 at Avon Oaks Country Club in Avon, Ohio.

First-time participant Theodore Roosevelt High School in Kent (A-Team pictured above) came away with both first and second place honors, as the A and B teams scored 338 and 361 respectively. They were trailed closely by Hathaway Brown, which scored 367. Other teams competing in the event include Avon Lake, Canfield, Chagrin Falls, Copley, Magnificat and Medina. 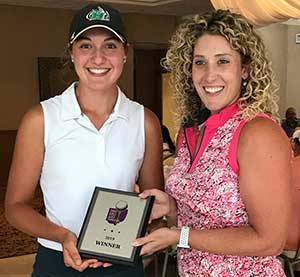 First place individual honors went to Alessandra Goyette (pictured with OGGF VP Helene D’Andrea), from Highland High School, who shot a 76; second place was Samantha Webb, from Lutheran West who shot a 79; and in third was Emma Picicco from Kent Roosevelt, who shot an 81. Top-50 results below.

“No matter what your score is, the game of golf is a journey that will take you places and through it, you will make connections that will last a lifetime,” said LPGA Professional and headliner Barb Mucha, who is also an inductee of the Cleveland Sports Hall of Fame. During the morning skills sessions, Barb and LPGA player Janice Moodie gave the girls insights into how getting in the right mindset affects the level of play, as well as some fundamental tips.

Also capping off the event was an Awards Dinner, where the OGGF awarded eight college scholarships.