The Northern Ohio Professional Golfers Association will hold its first major event of the 2021 season with the playing of the 36th Ohio Senior Open on the Fazio Course at Firestone Country Club.

The 36-hole tournament, contested in both Regular and Senior Plus divisions, is the most prestigious event for professional and amateur senior players in Ohio. 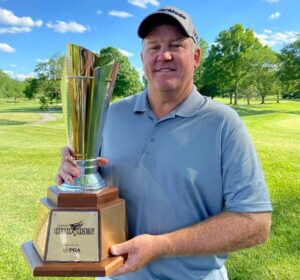 2021 Review: Bob Sowards solidified his status as the state’s top senior by winning his second straight Senior Open championship and amateurs Mike Cassell and Monty Guest dominated the Senior Plus competition. Sowards was the only player in the field to shoot two sub-par rounds with a pair of 68s and won by four shots over Howard Clendenin, a Firestone member. Sowards became the sixth player to win multiple Senior titles to go with his three Ohio Open titles (2002, 2004 & 2010). Cassell posted rounds of 67-68-135 (5-under) for a 4-shot victory. His 36-hole score was the lowest in either division, pro or amateur.