They could be your neighbor or your brother or sister-in-law.

They could be your cousin or your aunt or uncle.

They could be the person you are waiting behind while dropping your children off at school. Or, you could be in front of them in the check-out line at the local grocery store. Or, the person sitting next to you in the waiting room at the dentist’s office.

They are teachers and organizers and they are standard bearers for a very important industry in Northeast Ohio.

They are members of the Northern Ohio Section of the Professional Golfers Association of America, known as “club professionals” in many circles.

The mission of the Northern Ohio PGA is to promote interest and enjoyment in the game while enhancing the well-being of its members.

The NOPGA, with headquarters in Warrensville Heights, will accomplish this by enhancing the skills of its professionals and the opportunities for amateurs, employers, manufacturers, employees, and the general public. In so doing, the Northern Ohio PGA will elevate the standards of the professional golfer’s vocation, enhance the economic well-being of the individual member, stimulate interest in the game of golf, and promote the overall vitality of the game.

The PGA of America is one of the world’s largest sports organizations, composed of PGA Professionals who work daily to grow interest and participation in the game of golf. PGA Professionals pursue a variety of exciting careers within the golf industry including golf operations, teaching and coaching and executive management.

Its members also are competitors and when they compete it is not much different than watching Rory McIlroy or Phil Mickelson or Justin Thomas. They intensity is there. The focus is there. The sportsmanship and etiquette is there as well.

Beginning in late April the Northern Ohio Section will begin conducting its annual series of weekly tournaments, much like the PGA Tour. And, like the PGA Tour, the Section has events it refers to as “majors.”

Here is a look at those three tournaments:

It is the grandest of the NOPGA’s calendar of events, won by such icons as Jack Nicklaus, Byron Nelson, Herman Keiser, Frank Stranahan, Denny Shute, Billy Burke and Bob Shave Jr.

Think of it as the U.S. Open for Ohio residents.

The 72-hole event with a cut to the Top 50 scores and ties after 36 holes, is open to any Ohio resident, professional or amateur, as long as they have a handicap of 4.0 or lower. Approximately 200 players compete every year.

For the fourth year in a row and for the sixth time since 2011 the Open will be played at Weymouth Country Club and Fox Meadow Country Club, ideally located a few miles apart in Medina County.

Delaware’s Stephen Gangluff has an opportunity to join an elite group as a three-time winner following his come-from-behind playoff win last year and his one-stroke, wire-to-wire victory in 2018.

Don’t let their age fool you. These guys can still play. 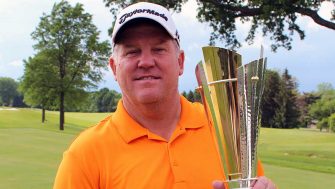 Don’t think so? Then, how does one explain Dublin’s Bob Sowards knocking eight strokes off par over 36 holes to win last year with rounds of 69-63? The 51-year-old, a three-time winner of the Ohio Open, came from behind in his Senior Open debut and did not make a bogey on the final day until the final hole.

Clevelander Walt Roberston and Silver Lake’s Jim Durr both went under par in the final round last year before Robertson won his second Super Seniors title by making a 15-foot birdie putt on the first playoff hole.

Is golf great, or what? Indeed, it is a game for all ages.

The seniors return to the challenging West Course at Firestone Country Club in late May for the most prestigious senior event in Ohio, sponsored by Michelob Ultra (House of LaRose) and 1-888-OhioComp (Minute Men Human Resource System).

The event, which annually draws approximately 100 entrants who carry handicaps of 8.0 or lower, has had several multiple winners. Most are well known names in Ohio golf, such as four-time champion Gary Robison and Jim Logue, who owns the distinction of being a three-time winner in the Main Division and a three-time Super Seniors champ.

Along with the Ohio Open, and of course The Memorial, the Toledo Open owns a rightful place on Ohio golf prestige meter.

The all-time king, however, remains Toledo’s own Val Chiaverni, who won six times from 1939 to 1953.

Non-Ohioans have won the last two years as Beau Breault (Howell, MI) and Kyle Rhodes (Plymouth, MI) prevailed in the Regular Division, with Breault defeating Kentuckian Ashton Van Horne in a one-hole playoff last year. Breault, a former Mid-American Conference Golfer of the Year out of Eastern Michigan, birdied his 36th hole to force the playoff.

Next Shackleford Throws Shade at Valley of the Eagles