Eighth-grader Solomon Petrie made it official on Saturday.

The 14-year-old from West Akron, a talented three-sport athlete with golf holding predominant status, formally registered at Archbishop Hoban, thus ending what had been one of the most hotly-contested, behind the scenes, high school discussions of the fall and winter.

The Petrie family – father Ben and mother Michelle, had been in touch with representatives from Hoban, Walsh Jesuit, St. Ignatius and the Akron Public Schools for the last several months. They made visits to each school, permissible under the Ohio High School Athletic Assn. rules.

Ben Petrie, a native of Barberton, wanted to make one thing perfectly clear regarding the decision-making process.

“I never once shopped Sol around,” Petrie said in a recent interview. “Never did I imagine what this decision would be like. I can tell you it wasn’t easy.”

The final call was made last Friday, with Hoban and Walsh Jesuit being the finalists. St. Ignatius was ruled out early for obvious reasons, with travel from the family home being the foremost issue.

“We would have had to move to make that work, which is something we really didn’t want to do,” Ben Petrie said. “Besides, we wanted this to be Sol’s decision and Sol’s decision alone.”

Solomon, who also plays basketball and runs track at Litchfield Community Learning Center, made his decision late last week but did not reveal it until late Friday.

“I just felt more comfortable when I visited Hoban,” Solomon said. “Hoban is more diverse, it has kids from all different cultures. I thought that would be a better situation for me to learn.”

Petrie, 5-7, 115 pounds, has been playing golf since the age of three under his father’s tutelage, entered his first competitive event at 5 and has been winning events ever since.

“When he first came to me we went to the long range and I asked him to hit some balls,” Manski recalled. “He was hitting balls about 110 yards on a line. I asked him to hit a few more, but only hit them higher. And, he did that. I had to pick my jaw up off the ground. Then we went to the short range and I watched him there. The jaw dropping continued. He was really good from about 50 yards in. I told his dad that if he ever messed with Sol’s short game I would be a big mistake.” 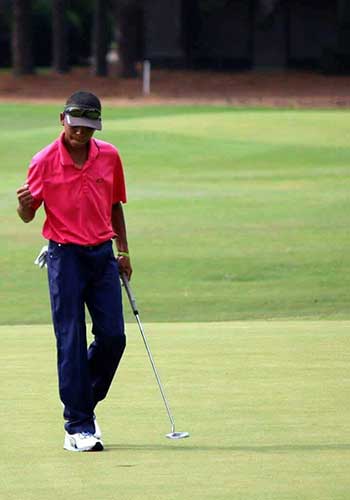 Petrie’s biggest win came last summer when he won the 13-year-old division of the U.S. Kids Teen World Championship at Pinehurst. He birdied three of the last five holes on Pinehurst No. 5 to win by two shots, besting Max Cashmore, from Dubai.

Petrie, a 3-time U.S. Kids state champion, has been on practically everyone’s radar since he began winning tournaments on a regular basis on the Kenny Novak and Ohio Optimist tours, as well as local events such as the Good Park Junior. He currently stands first in Ohio and 47th in the country on the Junior Golf Scoreboard Class of 2022 rankings.

“And that was with a double bogey,” he pointed out.

Golf is not the only sport in which Petrie excels. He was a key figure on Litchfield’s city championship basketball team and had a season-high game of 26 points – with seven 3-pointers – in a game versus Jennings. He runs the 400 meters and is thinking of becoming a hurdler.

But, he does not hesitate if you were to tell him he was limited to one sport.

“Golf,” he said, adding that he fell in love with the sport the first time he tried it and that his love has never diminished.

The golf programs at both Hoban and Walsh Jesuit have plenty to offer.

The Warriors, under coach and golf professional Bill Reilly, have four players returning from last year’s team. Walsh plays one of the most vigorous schedules of any school in the area, with trips to Canterbury Golf Club for the Kiely Cup, Inverness Country Club in Toledo, and Muirfield Country Club (not to be confused with Muirfield Village Golf Club, site of the Memorial Tournament).

Hoban, under fifth-year coach Quinn Parker, is regarded as one of Northeast Ohio’s up-and-coming programs. Parker has four players returning from last year’s team and two other seniors who could be in the mix. Like most, he was well aware of Petrie.

“Now we have an incoming freshman who feels he can step right in,” said Parker. “We still will have team tryouts and we will alternate players from event to event.”

Hoban will not play any team matches but has entered 24 tournaments with stops in West Virginia, Pennsylvania, Columbus and Toledo. Players are only permitted to participate in 20 events prior to the start of the post-season in late September.