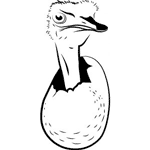 After a sizzling Better Ball 66 and a Chapman 67 on Monday at their home club of Sand Ridge, members Nick Fiori and Connor Pratt held a four shot lead over two teams heading into Tuesday morning’s final round Four-Ball session.

But on a big-boy course like Sand Ridge, against tournament-tough players like Jimmy Wild, Ryan Stefanski, Chris Okeson and Rob Schustrich, well “four shots in a Four-Ball ain’t nothin'”.

After tee shots and layups, Okeson, Schustrich and Fiori all had wedge in their hand looking for birdie at 14. Pratt had blown his tee shot way right — but way long as well — and he decided to take on the swamp protecting the green with his second. The play worked, as Pratt’s mid-iron found the putting surface.

The other three players in the lead group hit pedestrian wedges (being nice here), leaving long birdie putts. But then Okeson did the unexpected: 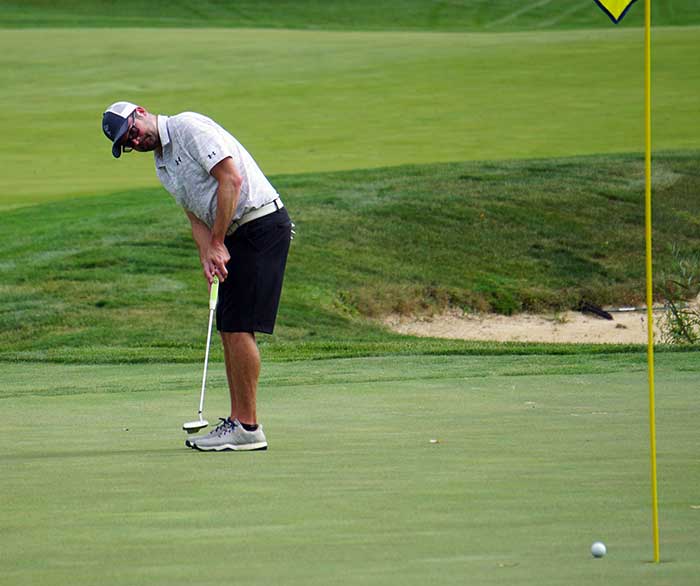 …he buried his 35-footer for birdie to close the gap to a single shot!

After Fiori missed his birdie effort, Pratt did what tournament winners do: he returned the Okeson favor by sinking his eagle opportunity from 18 feet, putting an exclamation point on it with a fist pump. The lead was back up to three shots.

At least, within the group.

In the group just ahead, Wild and Stefanski were making an even bigger charge. Just before Pratt’s eagle, Stefanski made a tap-in birdie the 14th after hitting the green in two. The pair then took turns making birdie at the short par-4 15th and the difficult dogleg par-4 16th to cut the gap down to two, a scorching 6-under par through 16 holes on the day.

Both teams in the final grouping made pars at 15 and 16, albeit with good looks at birdie.

Then all three teams made par at the long par-3 17th (although Stefanski left his free-run birdie effort just short in the jaws).

So the tournament would come down to the Sand Ridge Club’s par-5 finishing hole, which was playing short: down hill and dead down wind.

Could one of the chasers make an eagle to catch?

Would Fiori and Pratt make birdie to close the door?

Well, no, surprisingly. None of that. Instead, it was 20 minutes of odd drama.

Stefanski sent his tee shot on 18 way right, bouncing off a tree back toward him in the rough. A 3-metal hack from a heavy lie to the greenside rough, an indifferent pitch to the green, and two putts gave him a par.

Wild found the left fairway bunker off the tee, hit an approach iron to the front up-slope of the green, left his eagle attempt well short, then converted the five footer for birdie. Not the eagle they truly needed, but a 7-under par 65 Four-Ball day nonetheless.

Then it was the leader’s turn from the 18th tee. So Pratt and Fiori did what young, strapping golfers do now a days: they hit bombs down the 18th fairway. Far, far down the fairway.

On the 570-yard finishing hole, Fiori had a 9-iron remaining to the par-5 from the first cut. Pratt had a gap wedge in from the fairway. They held a one-shot lead over Wild and Stefanski and a three shot lead over Okeson and Shustrich, so the tournament looked to be over. Easy two-putt birdie at the worst, right?

Fiori found the green with his 9-iron, about 20 feet above the hole.

Then Pratt missed the green short-left with his gap wedge. A chip with too much zip on it gave Pratt a birdie putt of 8 feet, which he missed. Chapped, he then swiped in the par putt from a strong 4-feet without any read at all.

Fiori ran his eagle putt well past, then missed the birdie putt coming back. So the Pratt/Fiori team had to settle for par from a buck-fifty on the finishing par-5. While a disappointing way to close, the par was all they needed to secure a one shot victory.

Okeson got his greenside bunker shot up-and-down on the 18th hole for birdie to secure third place, two shots behind the champs and a shot behind Wild and Stefanski.

Fourth place was grabbed by another Sand Ridge member, Damian Rhodes, and his partner, First Tee of Akron Director Jeff O’Brien. Rhodes and O’Brien matched the low score of Tuesday’s Four-Ball round with a 65 of their own, highlighted by an eagle-2 hole-out by O’Brien on the par-4 11th (skin!).