The superintendent at The Fairways at Twin Lakes won the first event on Saturday.

The golf course was in truly great shape for an April event, with impressive green speeds and course conditions for so early in the golf season. But superintendent Harold Burns was a bit aggressive cutting three of the hole locations on run-off-the-green slopes on holes 2, 5 and 8, and that led to a few team-crash-and-burns and a fairly high winning total score.

(Tournament Director Chris Plute wanted to assure players that those hole locations were a one-time miscommunication that were not intended. The monthly tournament setup is to be ‘challenging but fair’; players won’t see an ‘extreme’ setup like that again until November.) 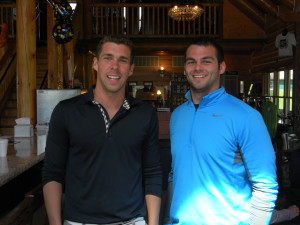 Tim Morrow and Griffin Todd (pictured at right) played solid golf and were able to stay away from any big numbers in posting a 6-under par score of 64 to win the April event in this monthly season-long series.

They nipped Mike Simpson and Jim Krivanek by a single shot. But Simpson and Krivanek were the big money winners on the day, as they combined their second place finish with two different skin opportunities to earn a team total of $1,446.

Morrow and Todd added a Double-Skin on holes 7/16 of the 9-hole layout to their first place winnings to earn $996 total as a team.

A strong field of 22 teams participated in great springtime weather on a golf course that was tournament ready, setting up what looks to be another fun season at Twin Lakes. A number of different teams and players had high finishes and won skins and pin shots, spreading the wealth around a bit. Complete results below.

The first posting of the season-long points totals will be made late next week, to begin a monthly update on the race to the 2014 Twin Lakes Series Championship.

The next event of the 2-Man Scramble Series at The Fairways at Twin Lakes will be played on Sunday, May 18th; register through the link to the Tournament Calendar.