IT HAD TO END SOMETIME, RIGHT? NOPGA DOMINANCE ENDS IN OHIO CUP

You could blame it on home-course advantage.

But, in the end there was only one reason why the Northern Ohio Section’s five-year winning streak came to an end during the 25th Ohio Cup at the Pinnacle Club in Grove City on Wednesday.

The Southern Ohio PGA simply played better when it mattered most — during the third-round 16 singles matches — and the final score of 18-14 proved it.

Of the 16 matches, the SOPGA won seven of them to the NOPGA’s six. There was one tie and one match went incomplete when it became mathematically impossible for the NOPGA to rally.

On the bright side, the NOPGA still leads the series, 15-9, and the 26th Ohio Cup will be held at an undecided site in the North in 2022.

“It was a good week,” said NOPGA Captain Gary Trivisonno. “I thought we played well. I looked at all the scorecards and most of the matches were close. They just played a little better than we did. I loved our team. They’re all good guys and a lot of fun to be around. We won together for the last five years and we lose together.”

Trivisonno, whose four-year reign as captain or assistant, comes to a close with a 3-1 record, sent a heartfelt message to his team following the disappointing conclusion.

He also pointed out that several team members played well enough to win most matches. The SOPGA just played a little better in each case.

“I think Jaysen was 6-under,” said Trivisonno. “Wilson was 7-under. That’s a tough way to lose.”

The SOPGA had an 8.5 to 7.5 lead when the singles matches began over Pinnacle’s 6,921 yard, par-72 layout. The NOPGA actually took an 11-10 lead behind three straight wins by Steve Parker (4-and-2 over Dennis Wells), Tony Adcock (2-and-1 over Anthony Andrews), Tom Atchison (2-and-1 over Chris Black) and Trivisonno’s halve with Tim Krapfel.

Of the 11 remaining matches the NOPGA could only manage three victories, including Joe Meglen’s 2-and-1 win over Andy Montgomery, Mark Evans’ 3-1 triumph over Kyler Booher and Jim Troy’s resounding 6-and-4 win over SOPGA kingpin and three-time Ohio Open champion Bob Sowards.

The big winners for the SOPGA over the two days were Wilson (Columbus Country Club) and Jeff Olson (Country Club of Dublin). They were the only players on either team to win all three of their matches to earn three points.

Five others on the 16-player SOPGA team won two points and three others contributed 1.5. 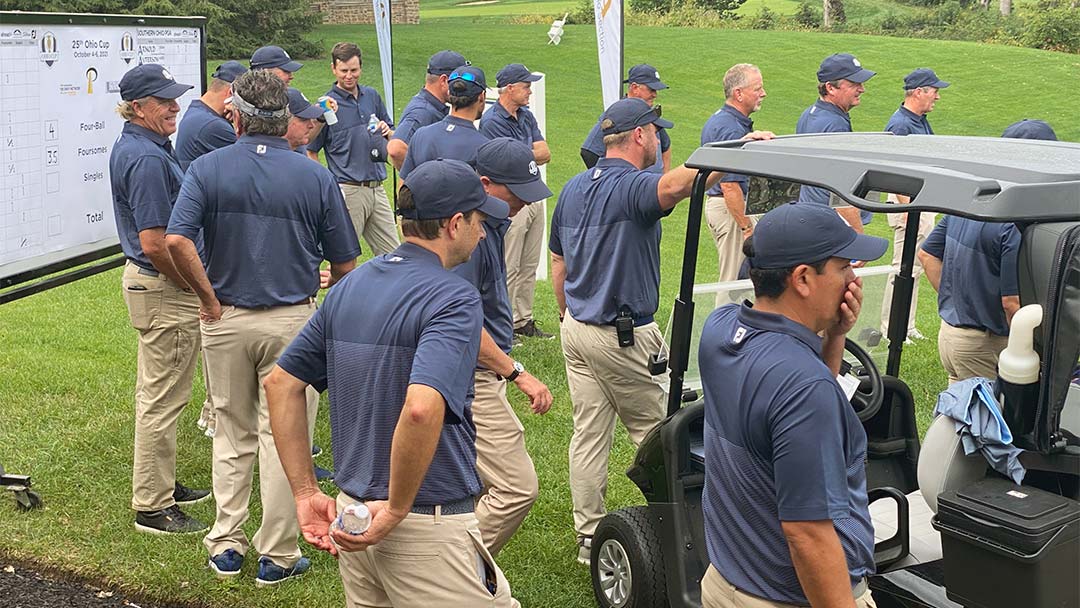