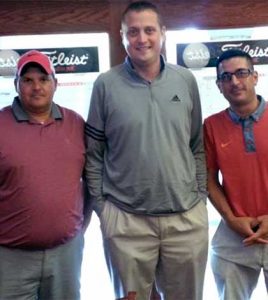 On a beautiful fall day in Northeast Ohio, the team of Nick Anagnost and David Sotka came out of the starting blocks on fire with a front nine score of 29 at the Big Met 2-Player Scramble. An equally strong finish of 4-under par on their last three holes, including an eagle on the par-5 16th hole, got them to a sizzling 13-under total of 59.

This is the second straight year that Sotka and Anagnost have paired to win the Fall 2-Player Scramble at Big Met. (Photo from last year’s win.)

Their impressive score still only narrowly edged the team of Brian Smith and Ryan Stefanski, who shot 12-under par 60 to finish in second place.

The victory pushes Nick and Dave that much closer to leader Steve Blackburn Jr. in the 2016 Cleveland Metroparks Golf Player of the Year race, which will be decided at the CMG Tour Championship at Manakiki in two weeks…

John is the PGA Professional at Big Met Golf Course in Fairview Park.

Next 2016 State High School Golf Championships Begin; You Can Help!