The only thing missing were the yellow painted stripes.

Players at the 2015 Summit County Amateur Golf Championship had to figure out a way to get a shot to stop in a parking lot, as that’s what the greens became as the wind ripped and the sun beat down on Akron’s Good Park Golf Course in the Sunday afternoon finale.

Putting on the greens was an absolute pleasure, as they rolled consistently and true. But getting the ball to stop as expected from even a short distance away became more and more difficult as the tournament went on.

Case in point: Steve Blackburn Jr. of Willowick posted the low Sunday round with a 2-under par 69. He was 3-under par on the day heading into the final hole, and hit what looked to be a perfect tee shot into the par-3 ninth (his 18th of the day). But the ball hit the green, skipped up in the air and went over the back, leaving him a downhill screaming chip onto that same parking lot/green. Bogey.

That made Blackburn the leader in the clubhouse with a 3-under par two-day total, but the final hole bogey looked like it really hurt. Blackburn was chasing first round leader Jake McBride of Hartville, who had shot 65 in the morning of the first round and seemed to be playing steady golf on Sunday.

But as the day progressed and the wind blew stronger and the greens dried out, McBride’s second round score crept to 1-over par on the day. Ultimately, Jake needed a par at the same hole Blackburn had just bogeyed to secure an outright victory.

McBride’s tee shot was a bit short and right, but he had an uphill chip. He left that chip short and it further ran back down the hill to 10 feet for par, which he didn’t convert. So it was playoff time at Good Park.

Best said, the difficult conditions and the pressure of the situation made it an eyebrow-raising four hole sudden-death playoff. Blackburn and McBride began the playoff on the par-3 ninth hole, and both players in essence reproduced what each had done in regulation: Blackburn went long-left, McBride went short-right, and neither player got it up and down. Especially tough was McBride’s par miss for victory (photo below), as it was only about four feet above the hole, albeit a tough downhill-righty slider.

Play then went to the first hole at Good Park. Blackburn sent his tee shot into the right trees, but had a gap to the green. He hit his second to the back fringe. McBride was just off the right side of the fairway but was blocked a bit by some branches and he had to go under them. He couldn’t overcome the difficulty, hit a poor second halfway to the green, and was forced to hit his third from about 40 yards in the fairway. He wedged it on to about 18 feet above the hole. Blackburn had a great opportunity to take the playoff right then and there. But a tentative chip and putt led to a bogey, and a two-putt by McBride continued the playoff.

The feel of the playoff turned away from tentative at the par-5 second hole. Both players hit strong, confident tee shots over the corner of the dogleg to the fairway. Both players knocked their second shots on in two. Both players hit the hole with their eagle efforts. But neither player could find the bottom of the cup to close it out, and the birdies sent the playoff back to the tough ninth hole par-3 to continue.

Learning from his past two efforts, Blackburn clubbed down and hit his tee shot perfectly on the fourth playoff hole, putting it just short of the green dead in the heart. McBride went next but pulled his tee shot left. It crashed into a tree, rattled around, and ended up in the fairway about 40 yards short of the green. Advantage Blackburn.

That advantage was even greater after McBride left his second shot pitch just short of the green, expecting a big bounce but not getting it.

So Blackburn settled in over his birdie putt from the front edge and hit a great one (photo above). The ball hit the edge of the hole and glanced off the flagstick, and the crowd thought it was in. But after the ricochet it ended up 3 feet above the hole.

McBride chipped up next, finished just a bit short, and tapped in for his bogey. 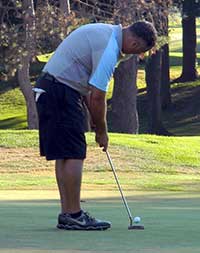 Now it was Blackburn’s chance to make a downhill slider at the par-3 hole to take the victory, as McBride had tried about a half-hour before. But Blackburn also rolled his attempt too far left and the missed putt continued down the hill, rolling out about 5 feet (right). Stunned, Blackburn missed the comeback putt, and McBride was the winner.

It was a tough finish, but given the conditions of the day, both players earned their way into the playoff with some great golf. And McBride earned the title by outlasting a veteran competitor in Blackburn.

Taylor Zoller nabbed third place alone by finishing at 1-under par 141, two shots back. In fourth place alone was Blake Fouty at 2-over par. Complete results below.

Special thanks to Larry Zimmerman and Dante D’Andrea for all of their work on the tournament; another great full-field event, gentlemen!