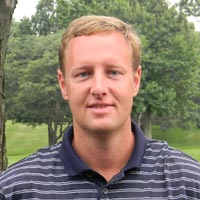 Oates rallied with four birdies on that same nine (the back nine at Good Park, where all the leaders start) and finished the day with a 2-under par score of 69 and a 1-under par 141 total to win his second consecutive Summit County Amateur title — amazingly, his fifth career win in the event.

But it’s not like Oates won going away, and that the day didn’t have it’s drama. Because it did, especially coming down to the final few holes.


33 players started Sunday’s round within five shots of the lead, but not many players in that big group made the heroic push. Pete Skirpstas of Medina posted the low round of the day, a 4-under par 67, but he started the final round six-over par and was too far back to rally. Ross Beal also made some incredible shots, including drives that came close to the greens on holes 15 and 17, but his roller-coaster round of 71 left him at 1-over par for the finale, yet another near miss. Drew Hanzel and Nathan Tartar played even par golf in round two, but couldn’t get their finishing totals under par.

First round leader Nick Lambos and past Summit County Am champion Aaron Crewse both played solid first rounds and then well enough throughout Sunday to have a great chance coming in to the final hole, the 214-yard par-3 ninth. (The final round leaders finish at the ninth hole because the back deck of Good Park serves as a fantastic set of bleachers for the crowd at the event.) Standing on that final tee, both players knew that Oates was in the clubhouse at 1-under par for the tournament, while both players were only at even par.

After sending their tee shots toward the final green, Lambos left himself with a swinging 40-foot putt from the left fringe, while Crewse’ solid hybrid over the front-right bunker gave him a 20-footer from just below the hole. 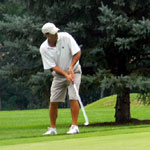 Lambos’ ball was a bit tight against the left collar and because of the distraction he didn’t pull off his best effort, leaving his birdie putt about five feet short.

One done, with only one more player to go.

After sizing it up, Crewse sent his twenty-footer towards the hole in stroke built of great tempo, and the crowd started rooting as the putt looked like it had a solid chance. But the ball curled away from the cup with just a couple of inches to go, and Crewse was nearly on his knees when the ball stopped because he couldn’t believe he left it short.

Five times winning a single event — any event, let alone one with the quality of field at the Summit County Am — is an impressive feat. No other player may ever match Dave Oates’ record in the Summit County Am. But even more impressive is the character of the gentlemen who play, as the three top finishers made a grand gesture: Oates, Lambos and Crewse all decided to donate their gift certificate winnings to the 2012 Good Park Junior Tournament in memory of Dave Barnes, the former Good Park staffer who passed away last year and is now memorialized through the event. Barnes always put great effort into running the Junior Tournament, and the three top players decided to make the donation in his memory. That gesture, made by the during the trophy presentation, broke the voice of long-time tournament director Larry Zimmerman; a truly nice moment.

Gift certificate prizes will be available at Chippewa GC.