As the leaders made the turn on Sunday, it started to sprinkle again.

As the players reached the 10th green, some lightning flashed. Then came the rain. Lots of rain.

After nearly two hours of a strong, steady downpour, tournament directors Mike Raby and John Fiander determined that too much of the golf course would remain under water for the remainder of the day, so third round play was wiped out and the results after 36 holes would stand.

That meant a playoff between round one leader Andrew Bailey of Rocky River and Sleepy Hollow’s newly crowned course champion Pete Skirpstas of Medina would decide the 2011 Cleveland Am.

The rain ended the chances of the playoff roster being even larger — or perhaps crowning a different champion all together — as the top of the leaderboard was tightly packed with just eight holes to go. Skirpstas turned at 1-under par 34 and led Bailey and 3-time Cleveland Am champion Brad Steven going into the back nine by just two shots.

But Steven had birdied the ninth hole by nearly holing his second and followed that up with a birdie at 10 to create some momentum, while Skirpstas made bogey at the 10th for a two shot swing.

Unfortunately, that’s when the skies opened so the finish could not be completed.

Raby and Fiander made the call to revert to the 36-hole scores at 3 p.m.

At 3:20 p.m., the water had receded just enough on the 18th green that a playoff could be started. Skirpstas hit his tee shot into the right rough, while Bailey found the fairway.

Skirpstas cut a gap wedge around the huge tree in the right rough to a spot on the green below and left of the hole, leaving about 18 feet up the hill with a big left-to-right sweep.

So Bailey had an opening, and he took advantage. He hit his own wedge shot to about 12 feet dead above the hole; with the green being wet, he was in great position for his birdie run. 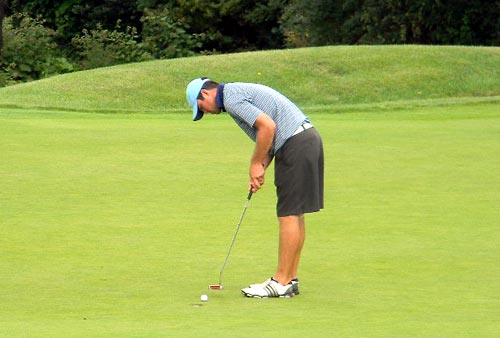 Skirpstas hit a solid putt that cruised just past the low side of the hole, leaving himself an 18-inch tap-in which he finished up.

That set the stage for Bailey to win the playoff. 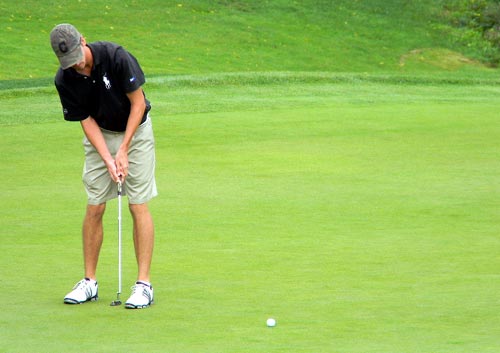 Bailey read the putt carefully with his caddie, stroked the downhill putt — and it simply stopped. Some excess water between his ball and the hole left him halfway home. Earlier in the day, that same putt would have been dangerously fast.

Bailey was now faced with a downhill six footer just to tie, which he failed to convert by sending it just right of the hole. It was an extremely disappointing ending to the day for the 2011 Big Met course champion.

With the playoff victory, Skirpstas becomes the first Cleveland Amateur champion who is also the reigning course champion from the same site, as he won the qualifier at Sleepy Hollow two weeks previous.

A big thank you to Cleveland Metroparks golf professionals Mike Raby and John Fiander for their fantastic work throughout the tournament, and a big congratulations to Sleepy Hollow course superintendent Chad Lewanski who has done a fantastic job in bringing this challenging golf course back to tournament quality.

Next Chippewa Scratch League Is A Go