After a three year run by the West Team, the East Team relied on a strong performance during the singles matches to reclaim the Northern Ohio PGA’s 2020 Assistants Cup, played September 24-25 at Sand Ridge Golf Club.

Captains Mark Sierak and Robb Schulze guided their team to a 5.5 to 2.5 victory during the singles matches for a final score of East 9 points to West 7 points.

With its 15th year in the books, the East-West Assistants Cup tradition continues to be a highlight on the Section calendar. This Ryder cup style event features the top eight Assistant Club Professionals from the East and West sides of the Northern Ohio PGA. 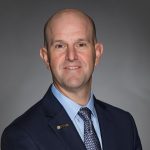 David is Executive Director of the Northern Ohio PGA.