The Turn has been the recipient of two big nods from the PGA of America recently, one national and one local. 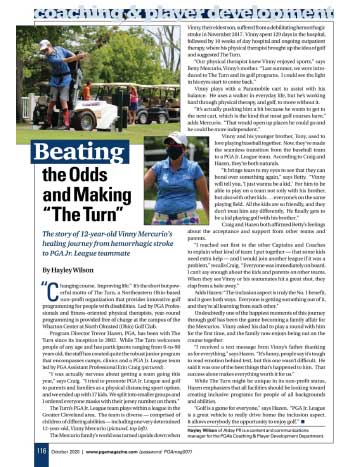 First, The Turn and it’s PGA Junior League team have been featured in an article in the October 2020 issue of PGA Magazine. The story is entitled “Beating the Odds and Making ‘The Turn’“, the story of 12-year-old Vinny Mercurio‘s healing journey from hemorrhagic stroke to PGA Jr. League teammate.

(Vinny is in the photo above holding The Turn sign.)

PGA Magazine goes out monthly to all PGA members around the country, both as a printed-and mailed hard copy and also online. Obviously, The Turn’s PGA Junior League team is unique because it is the first to have team members with disabilities participating. Read the story here >

Second, the Northern Ohio PGA gives out a series of awards annually to deserving PGA section members, and this year is no exception.

Trevor Hazen, Program Director of The Turn (in the back row second to the right of Vinny in the photo above), received the NOPGA Player Development Award. He won this same award in 2017, and was Teacher of the Year in 2019.

“We couldn’t be more proud of Trevor and Erin for their accomplishments, dedication and passion for The Turn,” said Robb Schulze, Chief Executive Officer of the Northern Ohio Golf Association.