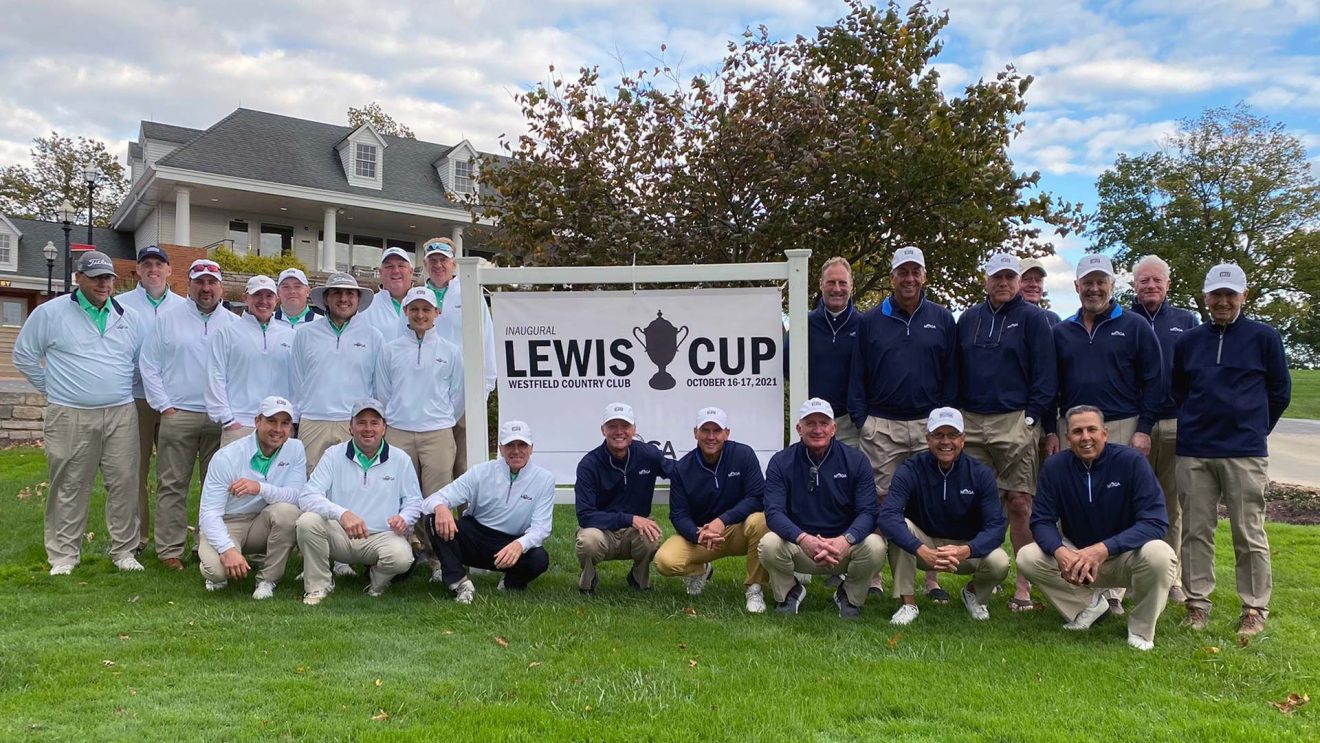 The Amateur and Senior Teams from the 2021 Lewis Cup Matches at Westfield Country Club.

Day one of the Northern Ohio Golf Association’s inaugural Lewis Cup is complete, and so far things look good for the Senior Team.

In a brand new event for NOGA named after local golf legend Robert C. Lewis and hosted at Westfield Country Club, the format pits the top players from the NOGA Player of the Year points lists on the Amateur and Senior sides. Over two days, the teams play at scratch in Four-Ball, Foursome and Singles Matches. But to even out the age disparity, the Seniors play from the senior tees, while the Amateur Team plays from the tournament tees.

After the first nine holes of Four-Ball (better ball) on the front side of the South Course, the Seniors jumped out to a stout 5 points to 1 point lead.

But on the second nine Foursomes (alternate shot) on the South, the Amateur team tied the Seniors in the session at three points apiece, giving them a chance to make a comeback in Sunday’s Singles Matches on the North Course.

The Seniors are up a total of 8 points to 4 points after Day 1. But in singles matches, with 12 points available, anything can happen.

“It’s always nice to have a lead,” Senior Captain Monty Guest said. “The amateurs did a good job of making a comeback and making it even in the afternoon, so we still have a lot of work to do tomorrow. We’re playing a lot of good players.”

“I am really proud about how we played in the afternoon,” Amateur Team Captain Jeff Blechschmidt stated. “I know we ended up tying the second session, but we could have given away the Cup with anything less. So I feel good about the team. I think everyone is excited for tomorrow to play the North Course.”

In the random draw of pairings for Sunday singles matches, Guest and Blechschmidt drew each other names. Sunday singles will tee off starting at 9:30 a.m…

9:30 AM
Denk, Joe SR vs Skufca, Tim AM
Guest, Monty SR vs Blechschmidt, Jeff AM

9:41 AM
Freeman, Allen SR vs Rowe, Kevin AM
Sparrow, Brian SR vs Carr, Andy AM

9:52 AM
Guadagni, Mark SR vs Zgrabik, Andrew AM
Saari, Scott SR vs Polick, Brian AM

10:14 AM
Baugh, Tom SR vs Schustrich, Robert AM
Durr, Jim SR vs Glassman, Zach AM

10:25 AM
Borlin, Mark SR vs Smith, Brian AM
Weaver, Bob SR vs Kloetzer, Shaun AM