Steve Blackburn Jr. of Willowick became the first player to ever win the Thompson Cup three years in a row in the 24 year history of the game. His season ending total of $2,678 also set a new record.

On Thursday at the final night at Fowlers Mill, Blackburn Jr. put an exclamation mark on the season by making birdie on the 374 yard 16th hole for another skin to make it a record total of 18 skins on the season.

Pin shot winners were Brian Perkins on the 180 yard par three 13th hole and Mark White on the 200 yard 17th hole. Pin shots were worth $70 each.

John Niedzialek, the Greater Cleveland Skins Game Director remarked, “It was great to see so many players participate. Hats off to our sponsors, including many of the courses that offer us reduced green fee rates, and Sean Kreft at Mulligan’s Bar & Grill in Highland Heights for being such a generous sponsor. We are also pleased to have NEOHgolf.com promoting our game stories. We are very fortunate to have these members donate to amateur golf in Northeast Ohio.”

“Steve had a great year, hats off to him. Several senior players also were near the top of the leaderboard showing that we can all take a run at Steve next year,” Niedzialek concluded.

Blackburn Jr., full of confidence and champagne, talked a little smack and noted “Come get me next year.”

“That’s just what we plan to do in 2015, as it will be our 25th season and we are looking forward to it,” stated Niedzialek.

The Greater Cleveland Skins Game is open to all amateur players and the 2015 schedule will be posted next March. 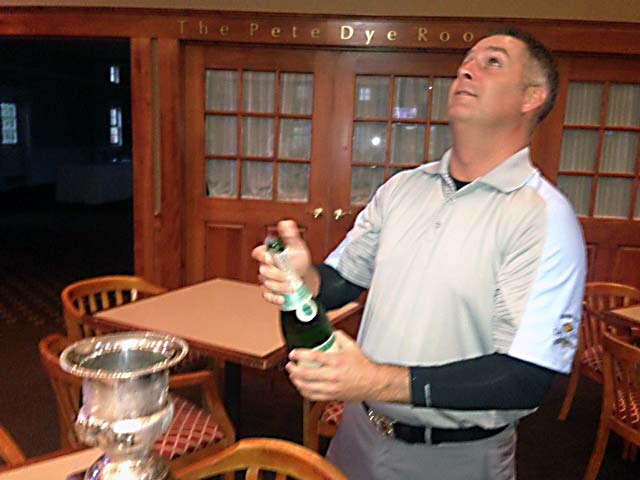