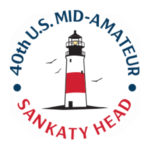 Cleveland’s Andrew Bailey put up a 2&1 victory over the second-seeded Garrett Rank of Canada to advance to today’s Quarterfinals at the U.S. Mid-Amateur Championship.

Bailey made three birdies during his Round of 16 match over the Sankaty Head Golf Club in Siasconset, MA, including a birdie at the par-5 17th to close out the match. He birdied his first hole of the day and never trailed.

Bailey will face the 23rd-seeded Mark Costanza of Morristown, NJ starting at 12:45p. At one time a nationally-ranked junior player, Costanza won the 2020 New Jersey Open as an amateur, and was the NY Met Golf Associate Player of the Year that same year. He won his Round of 16 match 4&3 over Brett Viboch of Sacramento, CA.

UPDATE 3:40p: Bailey lost his Quarterfinals match to Costanza by a 5&4 margin.