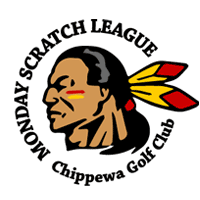 The leader faced a bit of pressure early on, but in the end Mike Simpson retained the top spot on the Leaderboard to win the 2021 Chippewa Scratch League.

Trailing Simpson by $75 starting the season finale, Allen Freeman and Justin Trzebuckowski posted a 3-under par T1 in the three hole scramble segment, with a birdie skin at the par-3 second to tighten the screws.

But a crushing bogey on the fifth hole in better ball and an even par shamble segment doomed Freeman’s chances to catch up.

Playing Week 18 with Ryan Stefanski as his partner, Simpson finished the 3/3/3 format with a 4-under par total, good for a one shot overall victory over three teams — and with that win enough money to keep Freeman in the second position.

Sam Spino rolled home two long birdie putts during the better ball segment to win those three holes outright with partner Dave Oates, nabbing one of four skins earned on the evening in the process. That made them the Week 18 big winners.

Simpson’s 2021 Leaderboard title is his third in four years, having won in 2018 and 2019 before Vaughn + Dave Snyder won last season.

For the second consecutive year, three players cracked the four-figure mark in winnings.

Thanks to Drew Durbin and Kyle Oyler for all of their hard work as league managers, and thank you to Brad Stewart and all of the Chippewa Golf Club staff for another great season!