They made it through COVID. They worked around their teaching schedules and other responsibilities at their respective clubs. They found time to practice.

Through it all they played some outstanding golf during the 2020 season. And, in the end they came out as the Northern Ohio Professional Golfers Association top honorees.

Jim Troy, Gary Robison and Tyler McHugh earned their titles with season-long excellence during what could be called a bizarre season. 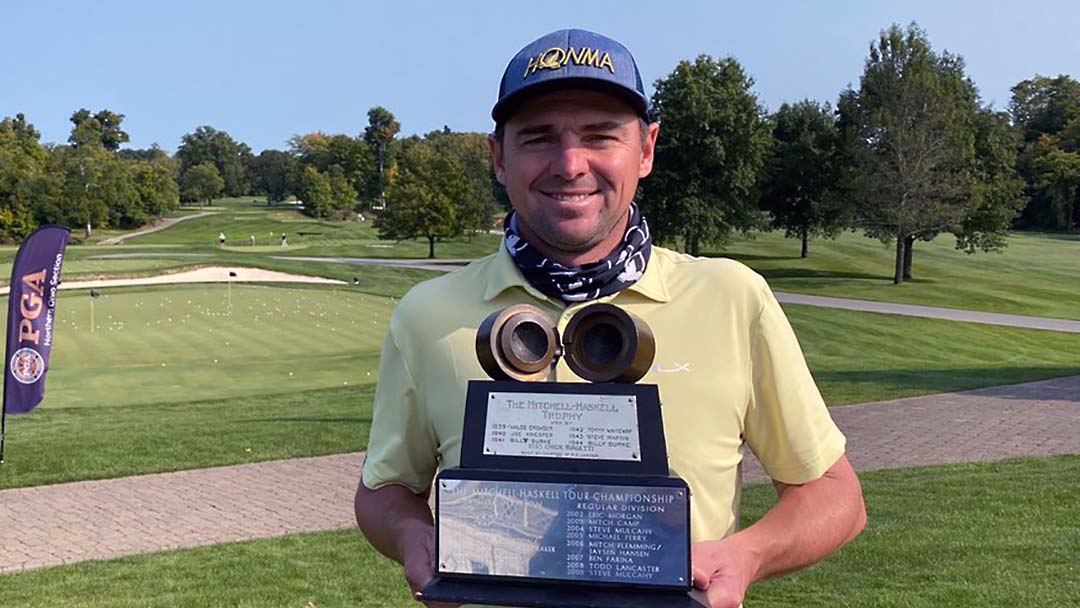 Two victories and nine other top 10 finishes would be enough to make most professionals look back on their season with a sense of satisfaction.

Jim Troy prefers to look ahead.

Despite using that formula to win his second Player of the Year Award in the last three years, Troy can’t wait for the start of the 2021 season.

“I felt I did a lot of good things during the season and I am very happy,” Troy said, while turning his attention to the future.

“But, I am really looking forward to 2021,” he continued. “Let’s face it, 2020 was a weird season for all of us with the pandemic. We had a number of events cancelled. We weren’t playing that much. I wasn’t playing that well at the beginning of the season. It was just a strange year.”

It certainly was noticeably different for Troy, who was breaking in a new set of Honma clubs after going to work for the Asian club manufacturer two seasons ago.

“It takes time to get accustomed to a new set of clubs and coupled with the early part of the season I think it took me awhile,” said Troy, a native of Chicago. “With that and everything the pandemic changed I feel I got off to a slow start. But, in 2021 I should be hitting on all cylinders and I am excited for a lot of different reasons.”

Pandemic-laced 2020 wasn’t too shabby for Troy, a 2004 graduate of the University of Nebraska with a degree in sociology.

He played in 11 events and besides winning the Mitchell-Haskell Section championship by four shots at The Country Club he also teamed with Kyle Kellogg to win the season-long Team Match Play event, twice coming from behind over the final nine holes to win.

Troy also had three runner-up finishes and three others in which he finished in the top 3.

The season came together for the 40-year-old in September at Country when he shot 68-75 for a one-under 143. It marked his second Mitchell-Haskell win, duplicating his victory in 2018.

“September is when I felt my game was in the right spot,” he said. “I was doing the things that you need to do to contend. I was able to get back to playing the type of game I knew I was capable of playing.”

Troy gave warning his game was coming together in late August during the NOPGA Professional Championship at Westbrook Country Club in Mansfield. After opening rounds of 72-69 he was one of five players in contention until bogeys on the 16th and 17th holes in the final round dropped him into a tie for second, one stroke behind winner Jaysen Hansen.

Following the Mitchell-Haskell Tournament, Troy closed the season by posting a second-place finish in the Shoot-Out at Shaker and a third in the Denny Shute Memorial Match Play at Portage Country Club.

So, in the final 56 days of the season Troy had one victory, finished second three times and third twice.

Not a bad scenario to revisit and smile. Even if you prefer to look ahead. 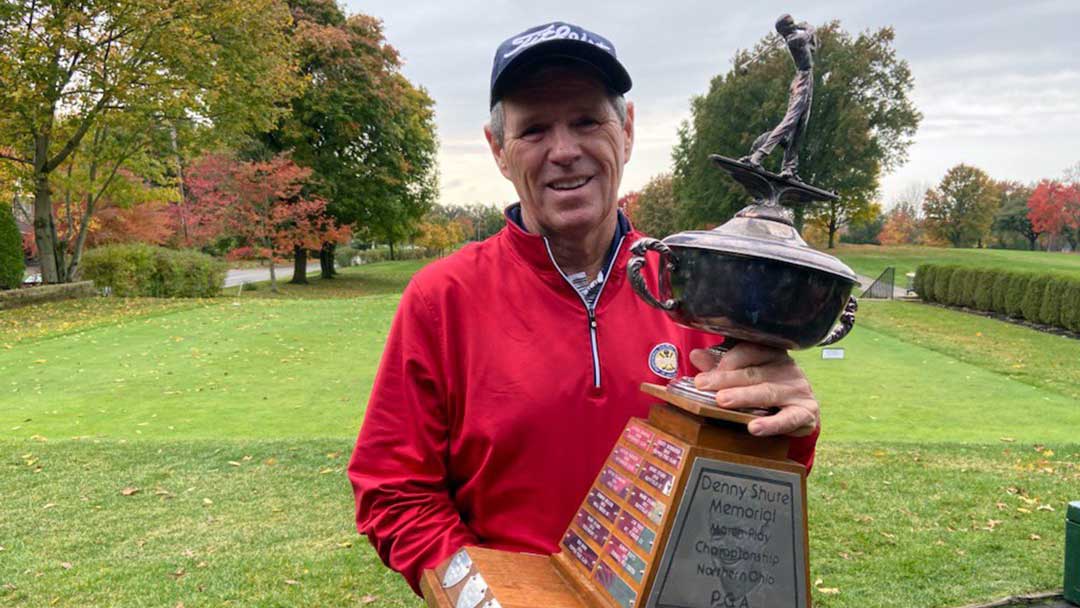 You can only say that about a select few. In professional golf, as in the PGA Tour, it is Nicklaus, Palmer, Woods.

In football it is Brown, Unitas, Brady. In basketball it would be Bird, James, Magic and Michael. Baseball has Ruth, Gehrig, DiMaggio, Mays, Clemente.

When it comes to the Northern Ohio Professional Golfers Association the name is Gary Robison.

You can attach all kinds of adjectives to Robison’s career in the NOPGA. Excellent. Outstanding. Marvelous. Terrific. Fantastic.

Or, you can simply say Gary Robison was great. Because he was. For a long time and in all facets of being a pro.

For much of the summer the long-time Brookside Country Club Head Professional and Director of Golf was in the running to win both the POTY and Senior POTY titles, which would have been a first in the 74-year history of the NOPGA.

“Absolutely I thought about it,” said the ultra-competitive Robison. “But, sometimes you step on the gas pedal and there isn’t much gas left, you know?”

Those times were few and far between for Robison, who announced his retirement shortly after winning the Senior Division of the Denny Shute Memorial Match Play for the third time and the sixth overall.

While vowing to return to compete in select events in 2021, Robison leaves as the most decorated and accomplished player in NOPGA history. His list of successes is longer than the 16th at Firestone.

He added to that list in 2020 with four victories, a pair of thirds and three others in the top 10.

His biggest victories came in the Senior Professional Championship on his home course and in the Denny Shute Memorial Match Play at Portage Country Club.

He recovered from an uncharacteristic opening-round 74 at Brookside with a 3-under 68 to win by a comfortable five shots. His 68 was the lowest round by three shots over the two days.

At Portage he had narrow wins over host pro Steve Parker (19 holes) and Salem Country Club’s Tom Atchison (1-up) before beating Seven Hills instructor Tony Adcock in the finals.

And, while it did not count in the final POTY standings he went 2-0-1 as a playing assistant captain in helping the North win the Ohio Cup for the fourth straight season.

“I guess if you sum it up I couldn’t ask for a better finish to my career in Northern Ohio,” said Robison. “I played well in what we consider our majors. I won some close matches in the Denny Shute and it’s always fun to be able to contribute and be a part of the winning team in the Ohio Cup. So, all in all I couldn’t have asked for anything better.” 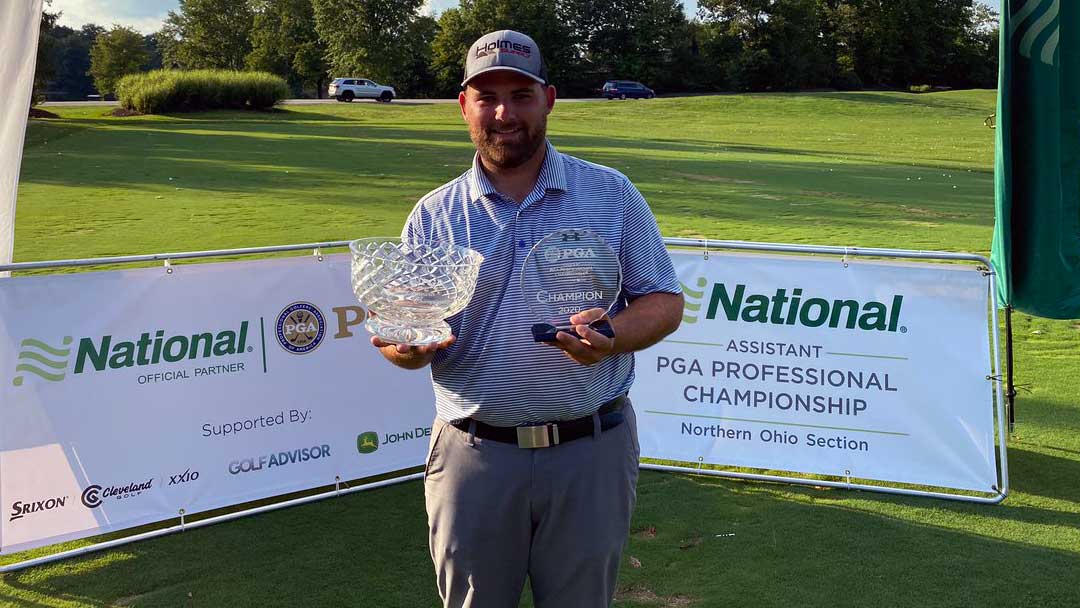 A famed coach once said that it takes talent to win but it takes character to repeat.

McHugh, 26, displayed plenty of both en route to winning his second straight Player of the Year title in 2020.

McHugh’s second POTY was the product of his solid play in four Stroke Play Series events and dominant play in the NOPGA’s “majors.”

It also was the product of McHugh’s desire.

“Obviously, I wanted to win in 2019 but I really wanted to win again in 2020,” said McHugh, an instructor at Fox Den Golf Course in Stow.

“Some really good players joined the NOPGA in recent years, guys like Jake Scott, Michael Balcar and Sean McGuire and a couple of others,” McHugh said. “Jake and those guys added depth to the Section and some other guys stepped up their games. So, winning made it more rewarding.”

And win McHugh did.

It started with a victory in the second Stroke Play Series of the season at Kirtland in June when he shot 2-under 68 and finished in the fall when he was the low Apprentice in the Mitchell-Haskell Tour Championship at The Country Club.

At Country, McHugh opened with an uncharacteristic 77 but his second-round 70 was the lowest of the day and the second lowest of the event and lifted him to a second-place finish behind champion Jim Troy.

“Country played really tough,” he recalled. “The fairways were soft and the greens were rock-hard. You really had to pick your spots.”

McHugh’s crowning achievement of the season, however, came during the National Car Rental Assistant’s Championship at Club Walden in early September.

He got off to a sizzling start with an eagle on the third hole and closed his front nine with three birdies to make the turn at 5-under 31. Eight pars and a birdie on the back followed. He continued his sterling play in the second round, finishing the front nine in 4-under 32 and overcame his lone blunder of the day – a double-bogey on the 10th – with seven pars and a birdie to close out the win.

All in all, McHugh was solid all season with his lone poor round coming in the second round of the Habitec Toledo Open, where he shot 80 but still finished fifth in the associate division of the event.

He was at or under par in every stroke play event.

“I was pretty proud of that,” he said. “That is one of my goals every year.”

Next Golf Should Be Banned. Because, Science.