I’ll be candid: when it comes to playing golf indoors on a simulator, I have little interest.

In my lifetime, I’ve maybe hit a dozen shots on a simulator. Whacking a ball off a flat mat into a screen filled with cartoon images or blurry still photos of a golf course just doesn’t do anything for me.

And putting or chipping a ball into a curtain then suddenly having an image of that ball appear on-screen rolling away is, well, laughable.

So golf simulators as a product category are low on the scale of interest for me. But not zero interest, and if the products were better my interest level might grow.

About a dozen different simulator companies were exhibiting at the 2018 PGA Show. All of them had beautiful high-tech displays, many set up to look like a living room or a clubhouse lounge.

But still, to my skeptical eye, many of those companies didn’t appear to be offering anything new.

High Definition Golf (with their product pictured above) was visibly different even from far away, as soon as their booth came into view. That’s because the images they use on screen are real-life high-resolution photos of Top 100 golf courses that shift around as you play the hole.

The company also added some CGI flourishes to those images to make them even more life-like. Clouds moving in the background. Trees swaying slightly in the wind. Even waves crashing against the rocks on the par-3 7th hole at Pebble Beach, as you can see while I’m playing that iconic hole in the video below:

The screen was huge and the golf course images filled my field of vision at high definition. So the look of setting up to and hitting a shot was as good as anything I’ve experienced in the land of fake golf. It felt “real” enough that I would have played all 18 holes if they let me. (The other people in line weren’t so agreeable to that idea.)

But even for all its high-definition glory on full shots, the putting thing is still embarrassingly horrible.

Putting on a simulator is just odd. A picture of a hole up in the air on a screen is weird and clunky and requires you to suspend belief. It’s not possible to read a 3-D break on a 2-D screen, so why even pretend it’s a thing?

One company doesn’t think you should pretend, and they have a pretty cool idea if you have the space. 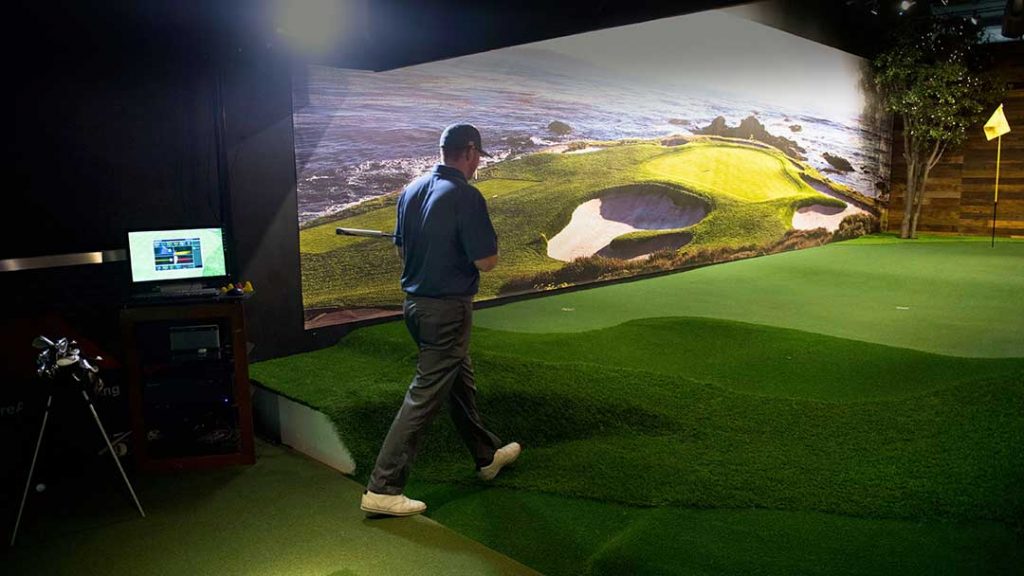 NextLinks wants to partner with all of the simulator companies to solve their fake putting problem. They build carpet-covered indoor greens with slopes and breaks using CAD-cut pieces of foam. They place those greens next to simulators to give you real putts. And if you’re in a facility with multiple simulators, they can build a full-scale green with multiple hole locations — and even add a bit of rough around the edges for chipping.

Here’s the truly cool part: they take the putting distance data from each hole you played on the simulator and set you up to putt out on their green. So if you hit it 20 feet away on the simulator, they’ll spot you 20 feet away on the indoor green. They use an overhead LED spotlight to pinpoint where on the green you should set your ball, then another light shines on the hole to which you need to putt. After a few seconds, the lights disappear and you putt for score just like you would on a real golf course. You can do this after each hole you play on the simulator, or you can store up the data and putt-out all of the holes all at once at the end.

It’s a much more realistic putting experience than putting into a piece of cloth hanging from a wall will ever be.

Certainly, indoor simulator golf will never be as great as playing the real game outdoors. The truly fun part of golf is the wind, the varying lies, the elevation changes — things that can never be replicated by sim.

Golf Should Be Banned. Because, Science.

Next Help CSU Golf, Win a Trip to the Masters!