2018 PGA Show: One Last Stroll Down the Aisles

I spent three days visiting the Orlando Convention Center for the 2018 PGA Show and never grew bored. There was plenty of golf gear, golf accessories and semi-related golf products to see and talk to people about.

It was great to feel the enthusiasm for the game from all across the people-watching spectrum, too: from old timers wearing blazers and bright poly-knits; to twenty-somethings hanging out in booths featuring high-tech offerings.

So to wrap up this week’s series about the 2018 PGA Show, some random product reveals and general observations: 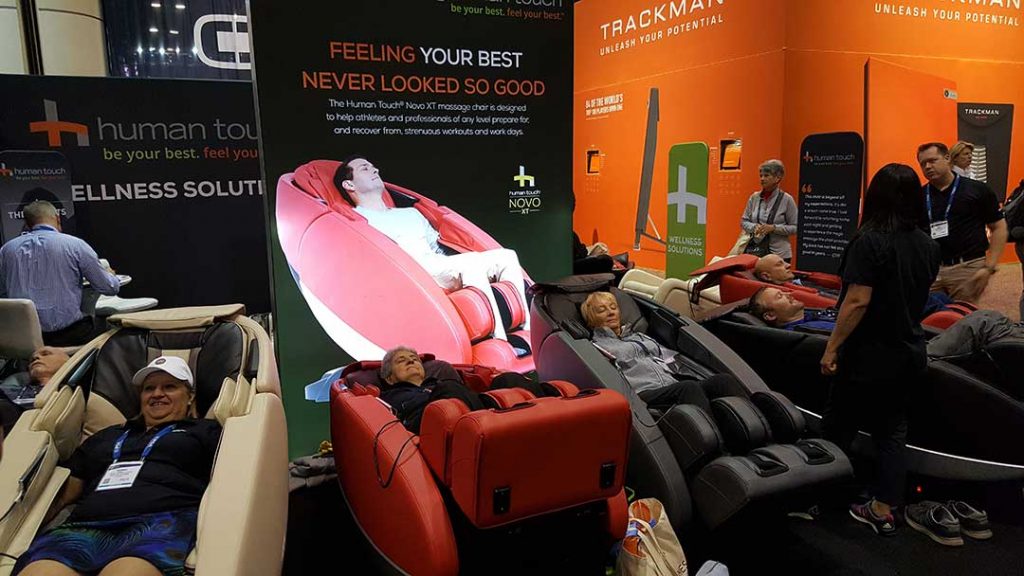 Perhaps the best 15 minutes of the week was the time I spent, um, “testing” a Human Touch massage chair. Their high-end model is called the Novo XT. It massages every portion of your body that it is legal to touch.

Of course it provided a great shiatsu massage on the shoulders and lower back. But the coolest part was the compression put on the legs and arms, and the rollers that went across the bottom of the feet. The chair also tilts up and down while stretching out your hips and spine. Wonderful.

It’s an undisputed fact that massage assists athletic performance, and I felt refreshed and ready to tackle the concrete aisles again when finished. If you have the $8,999 asking price, it’s like having a masseuse in your house daily to rub away the golf pain. 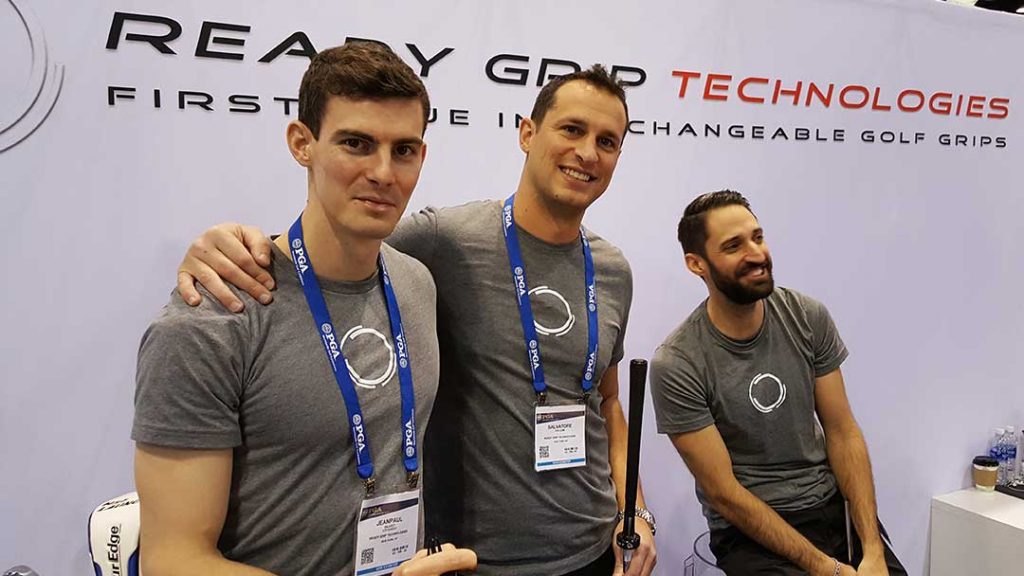 The most ingenious problem-solving idea I saw at the Show came from three guys who figured out a way to quickly install a grip without messy tape and chemicals. And to change out that grip again in 15 seconds — intact — if you decide you want to use a different one. (And they did all this development in their apartment in New York.)

Ready Grip Technologies offers a way to remove and replace a grip with nothing but a simple tool. There are two parts to their concept: a slider that wraps over the shaft to pull the existing grip on and off at the opening, and their proprietary tech that ratchets on the butt end of the grip to tighten an internal mechanism so the grip stays put.

They currently offer for sale their own grips with this tech included, but these guys know that’s not their business play. They fully understand that licensing this technology to Golf Pride, Lamkin, Winn and the other big grip companies is the way to go. 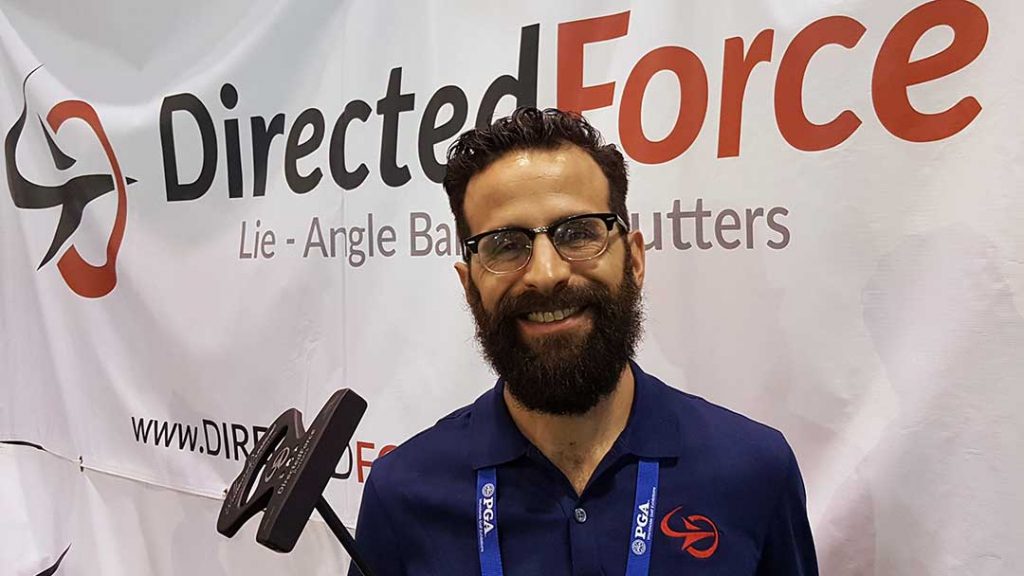 Sam Hahn with Directed Force Putters (above) has a good problem and a bad problem.

The good problem is that he is marketing a putter that has some fantastic math and science behind it. The inventor of the putter (not Sam) figured out a way to get the putter to balance toward the hole instead of hanging down and to the side (toe hang) or straight up in the air (face balanced).

If you set a Directed Force putter into this contraption that allows any putter to swing freely on the axis of its shaft, the Directed Force is the only putter where the face stays in line with the hole. Every other putter flops around wildly. So with this balance — the company calls it Lie Angle Balance — no manipulation of the hands is required to keep the face pointed toward the hole.

The bad problem: the current version of the putter is odd looking. Their model called Reno has a face that sticks out in front of the shaft by quite a bit, a big round metal ring behind the face, and a putter grip with a hole that is offset from center to get the hands back into a place that’s comfortable.

The putter works well, rolls the ball nicely, and it feels like the face stays online. But the design is hard to get past.

Sam says that a blade version is already in the works, and a mallet look is under consideration. The balance setup is based on a patented math equation covering the distance between the external weighting, the shaft entry point and the face. As long as that equation is followed, the balance will work. So the head has a number of different potential design looks, but it takes some work to get it to balance.

Here’s hoping Sam licenses out that math equation to some experienced putter builders, because the idea is sensational but the design execution needs a fresh perspective. 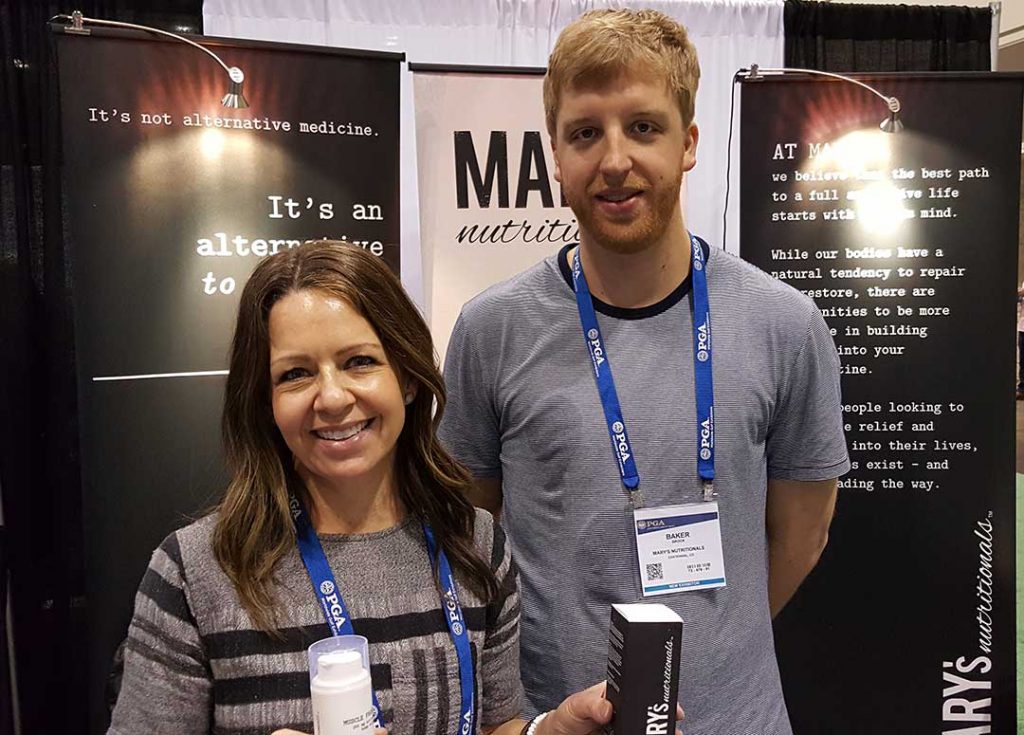 A handful of booths at the Show offered creams, balms and lotions to eliminate joint and muscle pain. Nothing new there.

But I saw at least three booths where the active ingredient touted in those lotions referenced marijuana. Chasing the legalization trend, I suppose.

The stated pain reliever and anti-inflammatory in the products from the brand Mary’s Nutritionals (as in Mary Jane) comes from the active ingredient found in hemp. The lotion and balm looks like any other, and both had a nice menthol smell and feel.

The lotion worked, too: my right wrist had been bothering me, and rubbing some of the lotion on it reduced the pain in minutes. I gladly accepted the samples they offered and will try them out on my constantly sore hamstrings.

Good thing I don’t have to take the PGA Tour’s drug test to play in the ADGA Pindy Wagner.

The Show is Big

The last thing I want to relay is the scope of the Show. There were hundreds and hundreds of booths, ranging from 10′ x 10′ to monster displays from the big brands of golf. I’ve been to many different trade shows in multiple industries, and the PGA Show ranks right up there in scale and look. And the booth designs from the PGA Show are movie set good.

The interior of the TaylorMade booth is shown above as the featured image for this story. Check out some more photos of the booths of the top golf brands on display:

Next Golf in February at the Cleveland Golf Show!