Some big hole-outs and many skins won on a lovely evening in Week 26 of the Greater Cleveland Skins Game!

The magical night at Little Mountain Country Club in Concord started with a birdie on the 11th, as Mike Angie drained a 6-foot breaker for a skin.

Then the real excitement began as Mark Foss doubled-dipped on the par-3 14th hole with a amazing iron shot and drained putt for a pin-and-skin.

The third skin was won by Thompson Cup leader Steve Blackburn Jr. at the 15th hole with a great birdie.

Skin number four was a spectacular one made by Niko Anagnost: an amazing 114-yard hold-off cut pitching wedge shot drained for eagle!

The final skin came from Billy ‘Bulldog’ Spiers, a perfect European chip-and-run good for an eagle on the goofy par-5 17th.

Mark Foss cleaned up on the pin shots for $70, as he also won the Mulligan’s Pin Shot on the 12th hole.

The final event of the 2016 season will be held at Fowler’s Mill Golf Club in Chesterland next Thursday. It’s a double-down event and players must have competed in 6 events previously to be eligible. The Thompson Cup will be awarded after play along with the ceremonial champagne toast… 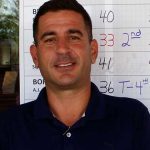 Nick is a Player / Director of the Greater Cleveland Skins Game.