The 2016 Greater Cleveland Skins Game season finale was played on a chilly, brisk evening at the scenic and always challenging Fowlers Mill Golf Course. A talented field fought it out on Double-Down Night, hoping to move up the leaderboard and hold the Thompson Cup — or at least win the Mulligan’s points list for a chance at the season long prize pool of cash.

And there was one player who made a big move.

Brian Polick got things rolling when he knocked it tight on the long, demanding par-3 third hole to grab the Mulligan’s Pin Shot, worth $64.00.

Steve Blackburn Sr. nabbed the other pin shot to earn $48.00. He just barely missed the double-dip, as his putt rolled over the right edge of the 7th hole.

But the big move was made by Mark Foss, who chipped in on the very difficult 6th hole to tough front pin location, earning the only skin claimed on the evening. The solo skin paid out a tidy $368.00. In Mark’s own words, “It was 18 short paces from my ball to the hole, and I hit the perfect shot.”

But Foss was just too far behind in the points list to overtake the leader, although he did move up into third place with his final event hole-out.

The consistent and steady play of Steve Blackburn Jr. allowed him to roll his way to the Thompson Cup trophy for 2016. With this win, Blackburn Jr. has won the Cup the last five seasons, an incredible accomplishment to say the least. Way to go Steve!

The 2016 Cleveland Metroparks Golf Player of the Year, Nick Anagnost, finished in second place on the 2016 Leaderboard.

Awards were made after play on Thursday, with Blackburn Jr. once again popping the cork on the bottle of champagne with the toast made to the winner.

Can Steve Blackburn Jr make it 6 years in a row? That story to be continued starting in April of 2017, when the Greater Cleveland Skins game tees it up for another thrilling season. 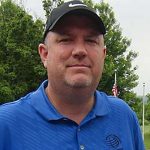