Steve Blackburn Jr. of Willowick won his fourth Greater Cleveland Skins Game Championship in a row after the final event of the 2015 season at Fowlers Mill Golf Course on Thursday.

Mark Foss had a chance to win it all when he made a dramatic birdie on the last hole at Fowlers Mill. But that birdie ended up tied off, giving Blackburn Jr. the championship and the Thompson Cup.

Foss finished second on the season. 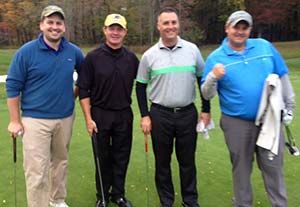 The final group who teed off last consisted of the top four players on the 2015 Leaderboard (pictured left to right): George Smiltins, Foss, Blackburn Jr. and Dave Sotka.

There were no skins won the night at Fowlers Mill, as the only holes birdied were the two par fives (which were tied out) and the last.

Blackburn Jr. ended the year with $1,552 in winnings, with 10 skins and 8 pin shots. He made no birdies on the night, but since all skins were tied there was no major change to the Leaderboard.

Blackburn Jr. also won the Mulligan’s Cup race on the year. A big thanks to Mulligan’s Bar & Grill in Highland Heights for donating $500 to the Greater Cleveland Skins Game for this points race. 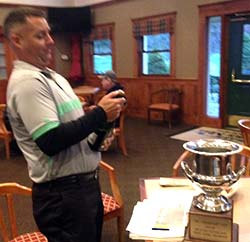 Awards were made after play on Thursday, with Blackburn Jr. once again popping the cork on the bottle of champagne with the toast made to the winner.

Thanks to all the golf course managers that help sponsor the Greater Cleveland Skins Game by offering our amateurs reduced green fees to help our Association remain viable for the past 25 Years!